If planning a career in academia, taking time to recover on maternity leave is no bad thing. “If you put things at work on a back-burner for a little while, you can step-up again later. That is totally fine.” 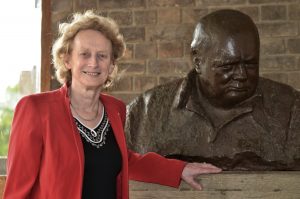 Happy International Women’s Day 2018! To celebrate, Dame Athene Donald, professor of physics, fellow of the Royal Society and master of Churchill College at the University of Cambridge, shares her #ScienceMama story on our podcast.

Athene started her first full-time position at the Cavendish (the physics department at the university) in the 1980s. She was unknowingly pregnant at the time, and  was the ONLY female full-time professor in the department.

“When the lectureship came up at the Cavendish… I went and talked to the guy who I guess was then head of department, but he was also, if you like, head of the area in which I was working. And I said: Look, I want to have a family. And he said to me: “Intelligent women should have children” which was incredibly encouraging.”

Thankfully, when Athene announced her pregnancy, no-one batted an eye.

“No one said “Look what happens when you appoint a woman!” No one said that to my face, and I never got any sense that they felt like that behind my back.”

The reason for this, Athene says, is that the system was naive. There had never been a woman, let alone a pregnant one, on the permanent academic staff at the Cavendish, so no one really knew how to support them or what to do. This gave Athene a lot of freedom to structure her academic and family lives as she wished.

“No one talked about it at all. Looking back, one of the things I remember very clearly about my maternity leave, was writing a lecture course whilst I was on mat leave, an coming back probably lecturing it that first term I was back… and now, people wouldn’t do that.”

This wasn’t the only “first” Athene experienced. Now more than ever, fathers are taking on the role as the primary carer for children. But when Athene’s children were young, this was rarely the case. Because of the job situation that Athene and her husband found themselves in, the made the joint decision that her husband would stay at home and care for the children whilst Athene continued in her role at the Cavendish.

“I think, as many a woman has done, he thought he might drop out for a little while, but not permanently…I think he found it hard to cope with if you like. It’s not easy.”

Athene has been working in academic science for three decades, and has seen many things change, including the attitudes that universities and their staff have to female scientists working and having children. But Athene doesn’t believe all the changes have been for the better.

“Now, it’s much more cold-blooded, if you like, that you have formally to declare what you’re doing. If I go back to when my children were small, I actually worked, what you might call, incredibly flexibly…and no one questioned where I was if I wasn’t in the department. And I think it’s much harder, the requirement that you sort of officially declare I am going to work the following hours.”

Athene has had a very successful career as an academic scientist, and so I asked her to share some advice on how to be a #ScienceMama: